How Intentional Corporate Culture Raises the Odds of Organizational Success

What is Intentional Culture?

Culture is like gravity – it just exists. Whether you actively cultivate it or ignore it, it has an impact on your organization.

But what is culture? We consider it the set of habits, beliefs, and values, along with the visible behaviors and invisible mindsets and attitudes that show up in an organization. It’s all happening, all the time – and it has a tremendous impact on the results you and your team are able to achieve.

That brings us to the idea of intentional culture. The foundation of which is a leader or leadership team stepping back to evaluate whether those habits, beliefs, values, and behaviors are helping to achieve the mission and outcomes. If they are, don’t be complacent. Continue to positively reinforce the behaviors that are driving your team’s success. If they’re not, it’s time to make a change.

That means being intentional about what behaviors you support and which ones you don’t.

Picture a horizontal line on a page.

Now imagine placing mission-supportive behaviors (what you want to continue) above the line. Anything that will no longer be tolerated gets placed below the line. If it sounds simple, it’s because it is. However, this straightforward exercise is often all you need to build the foundation of an intentional culture. 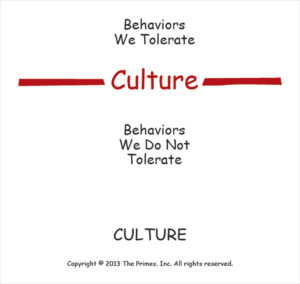 Here’s how it comes to life. Imagine an organization that has a lot of meetings. However, people typically don’t show up to them on time. In an unintentional culture, this behavior is permissible by default. Not because people appreciate others being late to meetings, but because the behavior is tacitly supported (i.e., no one says it’s not ok to be late, so it stays above the line). In an intentional culture, a leader can model and take a stand for the value of time integrity. That means if someone accepts a meeting for 10:30 a.m., they’re expected to arrive by 10:30 a.m. If they don’t, it’s noticed, not ignored (i.e., the tacit support for lateness no longer exists). Being intentional about these seemingly small behaviors will ultimately have a big impact on your culture. Against the backdrop of a culture of integrity, any breach of that integrity is addressed in the appropriate manner.

When it comes to delivery (and ultimately customer experience), our consultants have seen the benefit of instilling an intentional culture for clients. In one example, a large federal agency was struggling with delivery times. Critical projects were going overtime, taking up to four months to deliver, which eventually became a benchmark.

Our team worked with their leaders on a behavioral evaluation and determined it wasn’t lack of capabilities slowing things down, it was habits, attitudes, and entrenched ways of working. Over a period of time, these below-the-line behaviors were addressed and eliminated through increased attention and positive reinforcement. As a result, the delivery time dropped, yielding three completed projects of a similar scale in two months vs. the previous benchmark. It’s remarkable to see how a focus on individual behaviors ultimately yields success at the organizational level.

Trying to change everything at once is difficult. Instead, focus on the fewest, most important things first.

How to Implement It

Establishing an intentional culture takes time, as changing behaviors and habits does.

Here are a few tips to help you bring this idea to your organization.

As you’ve likely inferred, culture is something we’re passionate about at The Clearing. We believe it’s the lynchpin that holds successful organizational transformations together – which is why we have a team of experts dedicated to it. Whether a leader’s desire is to improve the customer experience, be more innovative, or develop the leadership capabilities of their team, culture will play a role in determining success. And establishing – or optimizing – an intentional culture only increases the odds that transformation will achieve and sustain the intended outcomes.